How to beat fatigue

If you’ve ever been fatigued, you know the signs: feeling tired, sluggish, no energy, rundown, and like your get-up-and-go has got up and gone. Fatigue is a common complaint in the general population and in people with physical illnesses and those with mood disorders.

Fatigue is subjective and multi-sensory, so it can be difficult to measure and classify. Fatigue also varies in duration and intensity in individuals and in its effect on their ability to perform daily activities.

True fatigue is defined as unusual and overwhelming tiredness that cannot be overcome by simply resting, unlike fatigue resulting from short-term physical or mental effort. With short-term fatigue, you are back to your regular self with a bit of rest. Persistent fatigue can make you feel like you are missing out on life.

People of all ages may experience fatigue. Fatigue can become an issue due to illness or other reasons and is a common complaint with people as they age. According to international studies, one-third of the adult population complains to their doctor of fatigue. In general, fatigue tends to affect more women than men, is more prevalent in low socioeconomic populations, and increases with advancing age.

While fatigue is commonly associated with growing older, many other factors such as stress, anxiety, and depression can contribute to fatigue. Fatigue can be a symptom that accompanies many illnesses, including rheumatoid disorders, multiple sclerosis, heart conditions, cancer, diabetes, and food allergies. If you have or suspect there is a medical condition behind your fatigue, consult a qualified medical practitioner. Some medications can cause fatigue, so if you are taking medications, check the possible side effects of fatigue.

How to reduce fatigue

Many factors contributing to fatigue are related to lifestyle habits, including but not limited to nutrition, movement, sleep and stress management. Establishing new habits to support the mind and body can go a long way to lessening fatigue. Below are some scientifically proven strategies to lower fatigue and help you feel more energized.

A. Hydrate: Water is essential for all functions of the human body, including the transport of nutrients from the food we eat. About 45%-75% of our body weight is water, and when we are low on fluids, we can feel tired or weak.

Even mild dehydration can lead to increased tension, anxiety, and fatigue. When we are dehydrated, the blood retains sodium, thickening the blood and making the heart work harder to circulate the blood through the body.

A general guideline is to drink half your body weight in pounds as ounces of water. For example, if you weigh 200 pounds then your daily recommended water intake would be 100 ounces or around twelve 8-ounce glasses of water. If your current water intake is well below the recommended guideline, gradually increase your hydration over time. Drink extra water if exercising or sweating more than usual.

B. Have regular routines: Our bodies naturally operate and thrive on rhythms and cycles called circadian rhythms. Some cycles are obvious, like heart rate, respiration, and menstruation.

The good news is that many of these factors can be managed with lifestyle choices. To help protect circadian rhythms, set and keep regular routines for waking and sleeping, exercising, and eating.

Both the timing and type of light exposure are especially important to our internal rhythms. The body is especially sensitive to blue light emitted from electronic devices, computer screens, and televisions. 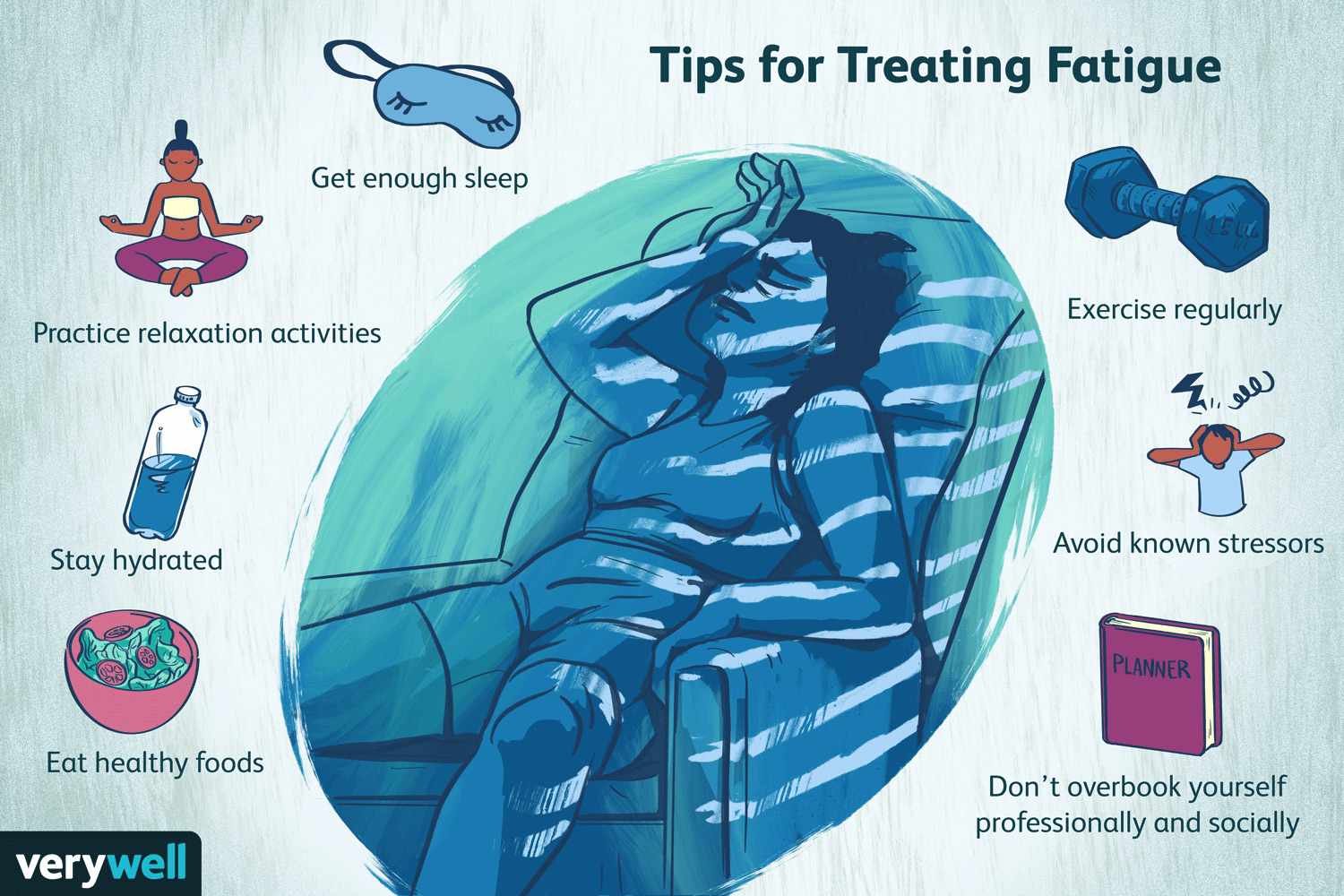 Since fatigue is often connected to poor sleep, it’s better to avoid exposure to blue light in the evening so that the body will produce melatonin in preparation for sleep.

Practicing good sleep hygiene means creating the right environment and following recommended behaviors to promote consistent, uninterrupted sleep. A sleep-promoting environment is one that is dark, quiet, the right temperature, and only used for sleep. While not proven to be a cure for insomnia, good sleep hygiene can help improve sleep quality and help lessen fatigue caused by poor sleep.

D. Shed some pounds: Carrying extra weight is associated with a higher incidence of persistent daytime fatigue. Considering that nearly 70% of the U.S. population is overweight or obese, it is not surprising that fatigue is such a common issue.

Sleep apnea is commonly considered the culprit, but one study conducted over a seven-year period found that fatigue is actually related to metabolic and psychological factors common with obesity.

Excessive body fat negatively impacts the immune system, causing the release of inflammatory compounds that are associated with sleepiness and fatigue.

The good news is that healthy weight loss in people who are overweight is a predictor of a reduction in fatigue and excessive daytime sleepiness.

The bottom line: some physical activity can help fight fatigue, but don’t over-exercise. If you are just beginning to exercise, increase gradually. Monitor yourself and notice if you feel energized or depleted after physical activity even once you’ve rested. If your day-to-day exercise routine leaves you chronically fatigued, consider cutting back.

F. Practice Yoga: The ancient practice of yoga incorporates many components, including meditation, breathing, stretching, and strengthening. Yoga has been shown to have a positive therapeutic effect on various ailments and conditions.

Study results show that yoga can reduce stress, anxiety, depression, and chronic pain, improve sleep, and enhance overall well-being and quality of life. One study of seniors found improvements in an overall sense of well-being, energy, and fatigue over a six-month period of regular yoga practice.

G. Eat for Energy: Some foods can actually cause fatigue, so it’s important to eat a nutrient-dense diet based on whole foods. Inadequate nutrition is identified as one of the key mechanisms contributing to fatigue.

Reduce or eliminate processed and packaged foods and instead eat a diet rich in quality proteins, healthy fats, and colorful fruits and vegetables, especially leafy green vegetables, which are high in iron.

Foods containing toxins, pesticides, and hormones require more energy to be metabolized by the liver. Organic, grass-fed, wild, and pastured foods are easier for the body to process and have better nutrient profiles. Eat seasonally and locally grown as much as possible for the highest nutrient value.

H. Consume enough Omega-3 Fatty Acids: Deficiency in omega-3 polyunsaturated fatty acids has been associated with fatigue, depression, anxiety, and other inflammatory conditions. The typical western diet is often low in omega-3 fatty acids, so adding more to your diet could help with fatigue.

Supplementation with fish oil has been associated with a reduction of fatigue and inflammatory markers in lupus, chronic fatigue syndrome, and rheumatic diseases

Try hydrotherapy: Hydrotherapy uses water for health benefits and the therapeutic treatment of various illnesses. This can include water at various temperatures and different levels of immersion. Hydrotherapy may incorporate a single type of therapy or be used in combination, such as cold water immersion followed by a hot steam bath or sauna.

Basic forms of cold therapy include plunging in cold water or simply taking cold showers. Start by switching your shower to cold for 30 seconds and then alternate between hot and cold.

Consider adding cold, hot, or a combination of hydrotherapies to help lower fatigue.

I. Spend time with friends: Positive social relations are good for health and longevity overall. While we all have varied preferences for how much time we want to spend around others, loneliness is associated with the development of pain, depression, and fatigue, especially over the long term.

Loneliness is not uncommon: more than one-third of adults over 45 feel lonely. Loneliness can also cause dysregulation of the immune system, making the person less able to fight off viruses which can lead to illness.

Check in with your feelings. Loneliness is the feeling of being alone, whether or not you are actually alone. If you notice feelings of loneliness, make an effort to spend time with friends or loved ones. Consider working with a professional if loneliness is severe.

J. Spend time in nature: There is growing evidence supporting the positive benefits on the mental well-being of spending time in natural environments. Forest bathing and nature therapy have garnered more attention for their benefits on human health.

Getting outdoors daily or for regular brisk walks can significantly reduce fatigue. For even greater benefit, try walking barefoot on the earth. Studies have shown that contact with bare skin on the ground reduces stress and improves sleep, both of which will help lower fatigue.

K. Manage Stress: Fatigue is consistently associated with stress, work overload, too little vacation or leisure time, and frequent conflicts with others. Stress is not simply the presence of these factors but is also our perception of stress and how we respond to it. Evaluate the stressors in your life.

Take steps to remove the worst offenders, if possible. If stressors can’t be removed permanently or immediately, participate in stress reduction practices like deep belly breathing, meditation, or physical movement.

L. Cut out Caffeine: When suffering from fatigue, many people habitually reach for caffeine-infused food and beverages to get over energy slumps. This can lead to increased tolerance, requiring even more caffeine to promote alertness.

If you have a caffeine habit, cut back gradually to minimize the symptoms of caffeine withdrawal. Start off by using ¼ decaffeinated plus ¾ caffeinated, then gradually increase the proportion of decaffeinated over a week or so until you are drinking 100% decaffeinated coffee or tea.

Try substituting dandelion root tea or other herbal teas instead of reaching for a cup of coffee.

Malabsorption of nutrients, including vitamin B12, folic acid, and nitrogen, is associated with alcohol consumption that leads to nutrient deficiencies linked to fatigue. Lower or eliminate your consumption of alcohol to improve daytime energy levels.

N. Take a break from Technology: There’s no doubt that many people have become addicted to the instant and constant access to information by compulsively checking in online, a condition coined “infomania.” This is often combined with multi-tasking, meaning our brains do not get a break while we juggle information from many sources.

The resulting information overload leads to fatigue, affecting relationships and sleep, and can also lead to depression and anxiety. Assess your habitual use of technology. Resist the urge to check your phone or email unless necessary. Give yourself limits and schedule technology breaks.

Could it be that there is an underlying ambition, a need to control, or a need for approval? Knowing that over-commitment is affecting you physically, learn how to say no.

Practice a few phrases ahead of time, like “Thank you for thinking of me but the timing isn’t good right now” or even a simple “No thanks.” Be firm and don’t feel the need to explain or apologize.

It’s best to work with a qualified health practitioner to ensure you get proper nutrition and the answers you are looking for.

P. Change your mindset: The way we think about fatigue can make fatigue even more persistent. Focusing on how badly the fatigue is affecting you may actually make the fatigue persist. When we believe that there is something we can do, we are motivated to take action.

Instead of ruminating on the sensations of fatigue, distract yourself with positive thoughts or implement some of the strategies in this guide. 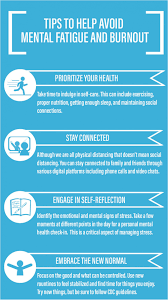