Astrology (traditionally known as iatromathematics) is an ancient medical system that associates various parts of the body, diseases, and drugs as under the influence of the sun, moon, and planets, along with the twelve astrological signs.

Medical Astrology is one of the branch of Astrology. It helps in knowing about present and future medical problems. Medical problems are predicted on the basis of houses, Nakshatras, Dashas is the basic theme of Medical Astrology.  It’s a tool for looking at ones predispositions to health and disease. You will not experience all the ailments listed.

Planets and similar points in the horoscope show what happens, what active power is at work. Zodiac signs show how the planets act, the characteristics of the event. Houses show where in one’s life, in what environment, the planets act.

Medical Astrology goes a step ahead of Medical Science in diagnosing the diseases one is likely to suffer in his lifetime by reading of his birth chart! Thus what you get is your Health Profile predicting the possible future diseases, against which you can, then take preventive measures even before they start manifesting themselves!

The individuals with strong birth chart are generally able to withstand or cope up with diseases better, whereas the others seemingly strong physiques may fall ill suddenly. This can be attributed to forming of a certain planetary combinations or Yoga at a definite time in rendering a person suffer from diseases. Medical Astrology helps here too! There are certain Astrological Remedies by which you can be protected from the malefic effects of such planetary combinations. 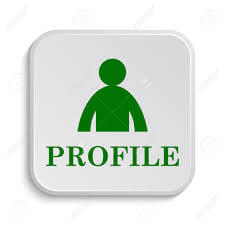 Houses and cause of death :-

Planets and cause of death :- 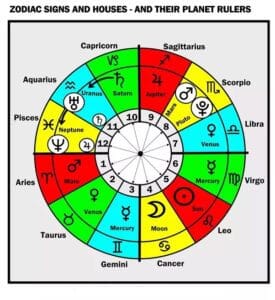 Click here for Signs / houses and Parts of Body 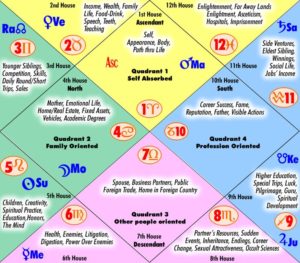 Aries : The energies are often in excess of the nervous and mental balance, and most ill-health has its origins in such things as violent exertion and outbursts of anger. The Aries person should seek poise at all costs.
Diseases are headaches, fevers, neuralgia, eye troubles, eruptions and inflammations, wounds and accidents.

Taurus : Over-indulgence and too much comfort lie at the roots of most disorders, but there is also a tendency to brood over troubles which lends force to any passing ailments.
Diseases which particularly attack the throat.

Cancer : Usually complaints originate in the emotions through some mental irritant, cause nervous reactions and general lessening of vitality. It has been said that nine times out of ten the Cancerian is hurt in health more by others than by himself.
Diseases are

Leo : Nearly all afflictions tend to arise from over-exertion of some kind.
Diseases are Heart trouble, poor circulation and similar troubles

Virgo : There is a tendency to upsets of the digestive organs from nervous causes, producing acidity and other troubles.
Diseases are Digestive troubles and complaints to do with intestines generally.

Sagittarius : Restlessness often causes the trouble; the folks under this Sign are peculiar to accidents and injuries.
Diseases are Gout, rheumatism, sciatica, accidents.

Aquarius : Nervous causes, usually, based on the highly sensitive nature.
Diseases are Accidents to the ankles and complaints affecting that part of the body; varicose veins, blood poisoning and some nervous diseases.

Pisces : Over-heating of the mind with possibly fancied injuries from others, plus much sensitiveness physical and mental, form the basis for most complaints.
Diseases are Influenza, colds, diseases accompanied by mucous discharges and similar complaints. 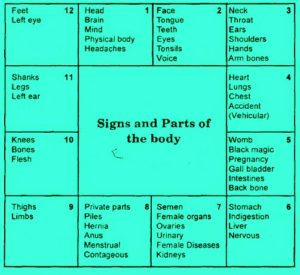 Click here for The significance of Rasis, houses and planets

VENUS : Food-stuffs-Gooseberry and other berries, wheat, and most of the spices.
Flowers-Daffodil, goldenrod, violet, rose, lily, etc.
Trees-Apple, pear, peach, fig, almond, ash, cypress and most of the vines.

Mars : Food-stuffs-Practically all the “hot” foods, such as ginger, and peppers, and those of strong taste such as the onion, garlic, etc. Hops are also under Mars.
Flowers-The unusual and rather coarser bright flowers.
Trees-Holly, fir (?) and all thorn-bearing trees, or bushes.

SATURN : Food-stuffs-Most vegetables, such as potatoes, etc.; parsnips, spinach and barley.
Flowers-Very few known to be associated, but the various bushes when in flower are thought to be so placed
Trees-Pine, yew, willow, elm.

The transient malefic results will be experienced during the major period, sub period and sub periods of malefic (become malefic) planets. Planets positioned in 6-8 position called Sastastika cause harm during their mutual Dasa / Antar Dasa periods.

Affliction implies that the Rasi/Lagna/House is occupied by one or more malefic, unsuspected by a benefic, or even aspect by a malefic. If Lagna /Moon sign (Rasi) is occupied by Mars, Saturn or Rahu the native will have defects or malfunctioning of urinary organs and sex organs. Bed wetting in early age and problems in urination in youth and prostrate enlargement after 40 years of age can be foreseen. Malefic conjunction of Saturn and Mars in 1st or 7th house indicates impotency and passive role in homosexuality. Rahu in Lagna/Rasi gives skin diseases and piles. Sun or Mars in birth sign/Rasi aspect by Mars or Sun, the native will have lung diseases. Second house affiliation gives voice and speech defects. If it (Rasi) is a fiery sign, obtaining the 6th or 8th house, occupied by 8th or 9th lord, who is malefic, speech defect may be predicted. If it is hemmed between malefic then dumbness is a certainty.

Affliction of 2nd house with Sun, then eye defects, squint eye, etc can be foreseen. If it is an evil house hemmed between malefic blindness can be predicted.

If the 5th house is an airy sign with affliction and Moon hemmed between malefic or Moon as lord of 8th exalted at positioned in afflicted 5th house mental illness, lunacy etc. are to be expected. Aspect of Mars with the above conditions indicate tumor in the brain, needing surgery or head injury is indicated. As afflicted 6th house cause all kinds of health problems. Moon in affiliate sixth house makes a wild tempered person or a lunatic. Venus gives sexual disorders, disfunction of sex glands and sterility. Mercury gives loss of memory, dull head and idiocy. Rahu gives tuberculosis, Ketu gives deformity of limbs and fistula.

Prevention is better than cure. Advance spiritual remedies will prevent the occurrence of diseases. After the evil affects have already taken roots, then the spiritual remedies will reduce the suffering. Fear not for Karma as inevitable. Karma can be remedied by Karma. As Karma is not a fatalistic path, there are ways and means to mend Karma with Shanti Karmas. Take courage, be optimistic and consult those who can give proper guidance for spiritual remedies to ward off the malefic effects of planets, ordained by destiny due to Karma.