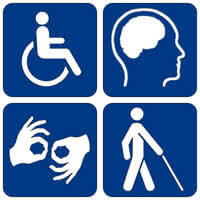 SEE THE PERSON NOT THE DISABILITY

A physical disability is a limitation on a person’s physical functioning, mobility, dexterity, or stamina. Other physical disabilities include impairments that limit other facets of daily living, such as respiratory disorders, blindness, epilepsy, and sleep disorders.

Prenatal disabilities are acquired before birth. These may be due to diseases or substances that the mother has been exposed to during pregnancy, embryonic or fetal developmental accidents, or genetic disorders.

Perinatal disabilities are acquired between some weeks before to up to four weeks after birth in humans. These can be due to prolonged lack of oxygen or obstruction of the respiratory tract, damage to the brain during birth (due to the accidental misuse of forceps, for example), or the baby being born prematurely. These may also be caused due to genetic disorders or accidents.

Post-natal disabilities are gained after birth. They can be due to accidents, obesity, infection, or other illnesses. These may also be caused due to genetic disorders.

Mobility impairment includes physical defects, including upper or lower limb loss or impairment, poor manual dexterity, and damage to one or more organs of the body. Disability in mobility can be a congenital or acquired problem or a consequence of disease. People who have a broken skeletal structure also fall into this category.

Visual Loss, Hearing loss ( Partial or total ), can also be due to disorders causing, among others, sleep deficiency, chronic fatigue, chronic pain, and seizures. Nowadays most of the cases of disabilities are due to Accidents mostly due to two Wheeler or four-wheelers. Accidents on trains are also on the rise.

Physical disability is defined as Conditions such as limb amputations, back impairments, muscular dystrophy, blindness, and deafness that can significantly impact activities of daily living, such as communication, work tolerance, self-care, and mobility.

According to the World Health Organization, disability has three dimensions: 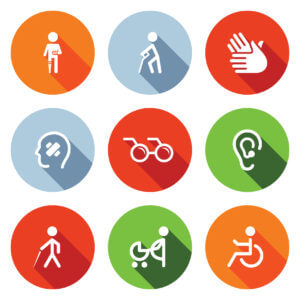 1.  Physical Disabilities
Includes physiological, functional, and or mobility impairments.
Can be fluctuating or intermittent, chronic, progressive or stable, visible, or invisible.
Some involve extreme pain, some less, some none at all.

2. Visual Disabilities : Legally Blind describes an individual who has 10% or less normal vision. Only 10% of people with a visual disability are actually totally blind. The other 90% are described as having a Visual Impairment.  Some of the common vision impairment includes scratched cornea, scratches on the sclera, diabetes-related eye conditions, dry eyes, and corneal graft. Visual impairments can be caused by a multitude of factors, including disease, accidents, and congenital illnesses. There is a difference between the needs of visually impaired individuals and blind people.

Deaf describes an individual who has severe to profound hearing loss.

Deafened describes an individual who has acquired a hearing loss in adulthood.

Deaf-Blind describes an individual who has both sight and hearing loss.

Hard of Hearing describes an individual who uses their residual hearing and speech to communicate.

5. Intellectual Disabilities : also known as Mental Retardation (MR), is a generalized neurodevelopmental disorder characterized by significantly impaired intellectual and adaptive functioning. It is defined by an IQ score under 70 in addition to deficits in two or more adaptive behaviors that affect everyday, general living. Involves a permanent limitation in a person’s ability to learn. Unfortunately, the very fact that these symptoms are invisible can lead to misunderstandings,  false perceptions, and judgments.

8. Spinal Cord Disability : Spinal cord injury can sometimes lead to lifelong disabilities. This kind of injury mostly occurs due to severe accidents. The injury can be either complete or incomplete. In an incomplete injury, the messages conveyed by the spinal cord is not completely lost. Whereas a complete injury results in a total dis-functioning of the sensory organs. In some cases, spinal cord disability can be a birth defect.

9. Invisible Disabilities : Invisible Disabilities are disabilities that are not immediately apparent to others. Invisible disability in simple terms is a physical, mental, or neurological condition that limits a person’s movements, senses, or activities that is invisible to the onlooker. Invisible disability refers to symptoms such as debilitating pain, fatigue, dizziness, cognitive dysfunctions, brain injuries, learning differences, and mental health disorders, as well as hearing and vision impairments. Unfortunately, the very fact that these symptoms are invisible can lead to misunderstandings,  false perceptions, and judgments.

11. Autism Spectrum Disorder(ASD) : is the name for a group of developmental disorders. ASD includes a wide range, “a spectrum,” of symptoms, skills, and levels of disability. People with ASD often have these characteristics: Ongoing social problems that include difficulty communicating and interacting with others.

12. Poliomyelitis or called as Polio : is a viral disease that destroys the nerve cells present in the spinal cord causing paralysis of some parts of the body or causing muscle weakness. It is a contagious disease affecting the nervous system and is caused by the poliovirus. Poliovirus can also be transmitted from one person to another through fecal matter. It even spreads through contaminated foods. The virus mainly affects children within the age of 5. The body parts which are infected by this disease are the legs, neck, head. There is no cure for polio; hence it has to be prevented by taking the polio vaccine at an early age.

DON’T THINK OF ME AS SPECIAL
I PREFER LIMITED EDITION.

DISABILITY IS NOT INABILITY.

AS FAR AS WE ARE CONCERNED, DISABILITY MEANS POSSIBILITY

MY LIFE MAY NOT BE GOING THE WAY I PLANNED IT,

BUT IT IS GOING EXACTLY THE WAY GOD PLANNED IT.

DISABLED, NOT DISABLE. know the difference. 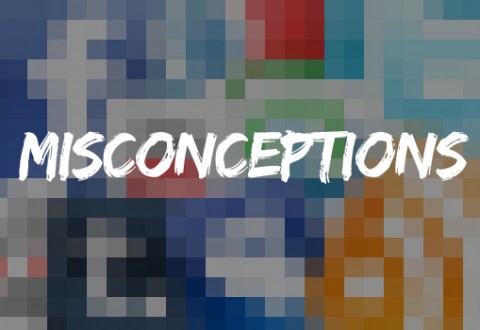 2. Wheelchair users are confined to their chairs and it’s a miracle when we actually walk.

3. We can’t speak or do anything for ourselves, so look to whoever is with us instead of talking to us.

4. We can’t be self-sufficient and independent, go to college, or get real jobs.

5. We are not whole or good enough. We need fixing and healing. Pray for us in public.

7. We need a lot of physical therapy, surgeries, constant caregiving, adaptive equipment, etc., and are miserable.

8. A physical disability means we instantly relate to another person with a disability.

9. We can’t date, get married, or have fulfilling romantic relationships.

We need to bring these misconceptions into the light. Those living with physical disabilities are always people first — valuable human beings. We carry the same hopes, dreams, and ambitions in our hearts. We want to be a part of the culture, actively involved in the community around us, not separate.

There is a growing gap between what culture says and what we know to be true because assumptions pervade the air.

However, we can fight the misconceptions. We can bridge the gap, but we can’t do it alone. We need our family and friends to speak up with us.

Speak on our behalf when we are not present.

Remind others to stop assuming anything based on outward appearance.

Even if a person looks different, please try your best to not make them feel different. That person just wants to be seen, known, and loved as an equal.

For every misconception I face, I’m that much more thankful for everyone who loves the real me. 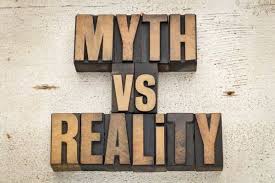 Myths, stereotypes, and stigma about disability are barriers to the realization
of the human rights of people with disabilities.

Common myths and stereotypes that emerge repeatedly in society include the following assumptions :-

Myth #3 –  Disability is a personal tragedy and deserves our pity : Disability is often viewed as an unending burden. People with disabilities are often viewed as tragic figures whom society should pity. Disability does not mean a poor quality of life. It is often the negative attitudes of society and the lack of accessibility within the community that are the real tragedy.

Myth #7 – People with disabilities can only work at special jobs made just for them : As with all people, certain jobs may be better for some than for others. People should not be denied employment opportunities based on the disability they have. Just because you can only think of one way to do something does not mean that other ways do not exist that are equally effective.

Myth #8 – People who have developmental disabilities do not have the same feelings as people without disabilities : False: All people experience similar emotions, whether they express them the same way or not.

Myth #12 – Disability means handicap : People with disabilities are only handicapped when environmental or physical barriers or people’s attitudes interfere with or prevent them from performing certain activities. 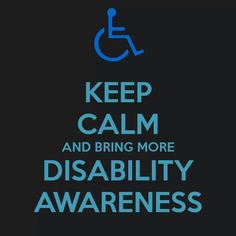 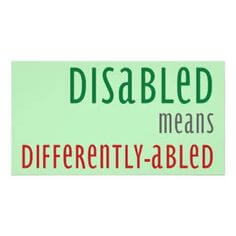 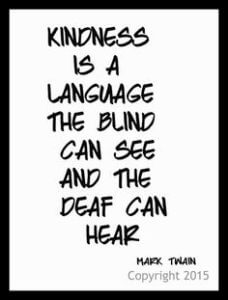 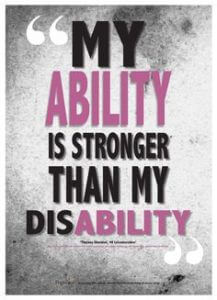